It is the Indian version of the older Renault Logan.

It was launched in 2007 in India and while in the rest of the world it has received new generations, in India the Verito remained pretty much the same. But, with the production patent in its pocket, Mahindra&Mahindra industry kept the old model into production as a cheap version for the masses, trying to replace the older national car called the Hindustan Ambassador, produced up until 2014 even if it was a patent after a 1950s Morris Oxford.

The new Verito launched in 2012 showed some aging markings, but Mahindra managed to cover them up with new headlights and a two-tone dashboard. They also made a shorter variant, called the Verito Vibe. In South America and in Europe, Renault launched a new generation of the Renault Logan, but in India, Mahindra kept the same vehicle from the first generation. It has only one engine, a 1.5-liter turbodiesel with 64 hp. 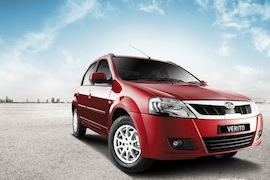