Lincoln introduced an updated version for the third generation of the Navigator, trying to keep up with its main competitors, and along with the short-wheelbase version, it upgraded the longer version as well.

The updates introduced for the 2015 model year were not that obvious, but still enough to make a clear statement on the market. Seven years after this generation's introduction, the Navigator started to show its age, and customers didn't like that. Moreover, its main competitors had already revised or were about to change their luxurious SUVs.

Like its short-wheelbase sibling, the Navigator L received a new grille at the front, and new LED daytime running lights. In addition, on the sides, the back of the car went through some serious changes. For the 2015 model-year, the Navigator L featured a red light strip that crossed the tailgate, visually uniting the taillights. Moreover, instead of discrete badges, the car got its nameplate spread across the tailgate at the bottom of the rear windscreen.

Customers could opt for various interiors and get up to seven seats. However, since it was a luxury vehicle, it offered six captain seats for the three rows. As expected, these seats were as comfy as possible. Thus, the landyacht could offer enough comfort for a family of six.

Probably the best part, the Navigator was fitted with a powerful 3.5-liter EcoBoost V6 engine that developed V8 levels of power. The unit developed 380 hp and was mated with a very smooth 6-speed automatic transmission. A rear-wheel-drive system as standard. However, the AWD version was equipped with hill descent control and hill start assist. 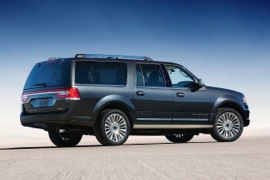