The Lincoln's flagship SUV was the Navigator, especially the L version, which featured a longer wheelbase and room for seven.

Designed as a leading competitor for the Cadillac Escalade, the 2007 Navigator L was introduced in February 2006 and was a completely new model. It was still based on the same platform as the Ford F150 pickup truck and the Ford Expedition.

It seemed like Lincoln's design department was depleted by new talents, and the carmaker brought back the team from the '80s, and they were happy to put as many chromed parts as possible. Otherwise, it was hard to understand why a 2007 model vehicle featured so many shiny parts on the bodywork. Apart from the huge grille, the Navigator L was garnished with mirror-like sideboards and runaround rims for the headlights and taillights. At least, they didn't make the retractable running boards as shiny as the other components, so nobody could slip on them. Compared to the regular Navigator, the L version featured a 12" (304 mm) longer wheelbase and extended rear windows behind the C-pillars.

Inside, the designers made a mixed interior with an instrument panel from the '50s, a dashboard design from the '80s, and devices from the 2000s. The analog gauges and dials showed similar characters to those installed on a Lincoln Towncar from 1981, with square background and slim lettering. But the Navigator L was all about comfort more than design, which should look appropriate for its customers. And in that aspect, it fulfilled its quest by offering a modern infotainment unit with sat-nav and a ceiling-mounted DVD player for rear-seat entertainment.

Under the hood, Ford placed the 5.4-liter V8 engine paired to a 6-speed automatic transmission. It was the only drivetrain available until 2015. 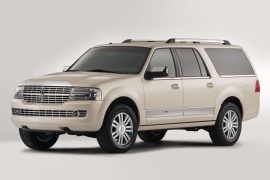