In 1999, Ford built the first generation of the Lincoln Navigator to impress, and besides the Greyhound buses and semis, it was the most commanding vehicle on the road.

Ford thought that a luxurious SUV would attract new customers, and it was right. All of a sudden, all the other limos and expensive German cars looked caught off-guard and humiliated by the insane big Navigator. Lincoln's designers were not completely satisfied with the size. They had to make it look like a fortress on wheels.

The impressive chromed grille with vertical slats stood proud above the already tall-mounted front bumper. Maybe it was a plastic one, but nobody wanted to found out if it was hard or soft plastic. Under the car, a shield with a pair of "fangs" made the situation even more complicated for the humble, regular sedans on the road. On the sides, the carmaker installed a set of steps to ease the ingress and egress from the car.

Inside, the seven-seat premium SUV featured captain seats in the middle row. A pair of wide seats separated by a massive center console left a lot of space between the front occupants. The driver could see a full instrument cluster with six dials and gauges. The gear selector found its place behind the steering wheel.

Under the hood, Ford installed two versions of the same 5.4-liter V-8 engine paired to a standard four-speed automatic transmission. Lincoln built the Navigator with either a rear-wheel-drive or a 4x4 on-demand system. 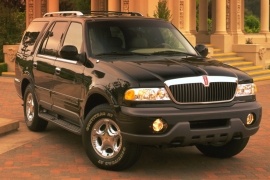