The large Lincoln MKS intended to grab a part of the premium full-size sedans in the U.S. when it was launched in 2009. But it still needed an upgrade in 2013.

For the 2014 model, the MKS received numerous updates both outside and, most importantly, inside the vehicle. To begin with the exterior look, it is noticeable a big change for the front fascia. Lincoln has adopted a double-wing design for the radiator grille and the headlights. These are forming an angular V-shaped style that looked great for the era. The high beltline, ascending toward the trunk, was not so obvious to offer a sporty look. It was just right. The taillights design though didn't seem to have any connection with the front design.

Inside, the dashboard featured the MyLincoln Touch system that was based on Ford's SYNC2 infotainment unit. It couldn't connect to Android Auto or Apple CarPlay, but it had a dedicated app that could read text messages and had voice commands. The instrument cluster featured two TFT displays, placed left and right of the speedometer.

For the technical details, the 2013 Lincoln MKS offered a revised 3.7-liter engine that boosts the total power output to 300 hp, which made the largest sedan produced in the U.S., at the time of launch, get a better 0-60 mph (0-97 kph) time. Another improved feature for the chassis was the continuously adaptive dampers, that made the car more planted on the road, but also more comfortable. 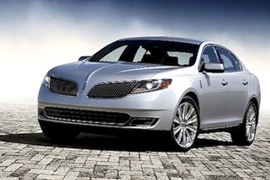