The eighth generation Lincoln Continental was introduced in the luxury segment in 1988 and represented a big change for the automaker and the nameplate itself.

The large sedan got downsized in terms of engines, adopting a 3.8-liter V6, developing 140 HP in the first years of production. The rear-wheel drive system was also gone, being converted to a FWD and thus cutting down on fuel and construction costs while managing to gain a bit more interior room. However, technology was still on the Continental's side, being the first in the lineup to ride on an self-leveling air suspension. Another interesting feature was the speed-sensitive power steering, which facilitated low-speed maneuvers. Small changes were made the following years, such as redesigning the dashboard to accommodate dual airbags, grille, headlights and stoplights as well as the introduction of an optional individual seats feature that ditched the split bench in the front for traditional seats, a floor shifter and central console. 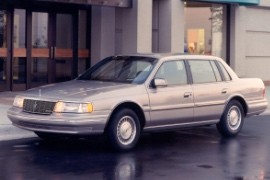