The fourth generation for the Lincoln Continental appeared in 1961 and has a bad name because it was the convertible in which JFK was assassinated in 1963.

But the car had other qualities for which it was very appreciated at the time. It was based on a Ford Thunderbird with an extended wheelbase and had four doors installed. The rear doors were rear-hinged (suicide doors) for easier loading and unloading of the passengers. To prevent the accidental opening during driving, a contact and a lamp on the dashboard were installed. This is how the “door ajar” warning light appeared on vehicles.

Under the hood, Ford installed a 7.0-liter V8 (430 cu-in) engine with 325 hp. The engine was replaced in 1966 by a bigger, 7.5-liter V8. All Lincoln Continentals were equipped with a 3-speed automatic transmission, produced by Ford. The first models had the Turbo-Drive automatic and the latter, since 1966, had the C6-automatic gearbox.

Some interesting features for the Lincoln Continental were the vacuum-lockable doors, adjustable height of the steering column (not tilting) and the unibody construction for the big, over 2.6 metric tons vehicle. It was heavier than its competitors, even though it was smaller. Despite its 5.5 meters length, the rear passengers didn't have enough legroom. Only after 1964, when the wheelbase was extended to 3.2 m (126 in), the passengers from the rear bench had enough room. 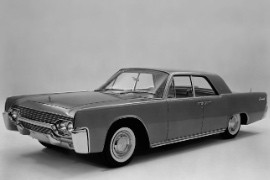