Eisenhower was in the office, the U.S. launched its first satellite and the Barbie doll was introduced and it was an instant hit. It wasn't the same victory for the Lincoln Continental MkIII that was launched in the same year.

It was a busy year and Lincoln tried its move into the luxury car market, dominated by the Cadillac Eldorado. It was the era with big fins and Lincoln decided to outdo the competition. And it did it in every way. The Continental MKIII was available in a specific color named Presidential Black, it was bigger, heavier, and faster than the Eldorado. Unfortunately, it also consumed more fuel than the Cadillac. On a good day, the big, 5000 lbs (2268 kg) Continental could get 9 mpg (26 l/100 km), but, since the gasoline costed only about 30 cents/gallon, that wasn't a problem.

Inside, the big Continental MKIII had ceiling-mounted air-conditioning vents and other luxurious amenities for that era. But there were a few problems. Lincoln didn't put its name on the car and tried to sell it as a Continental MKIII. It didn't even have a Lincoln badge on the car.

But the real problem was that a financial crisis struck in that year, so the car sales stalled. So, the big Continental MKIII was axed and helped Lincoln to survive. The luxury brand lost USD 1000 for each and every Continental it sold. The car was mostly hand-built. 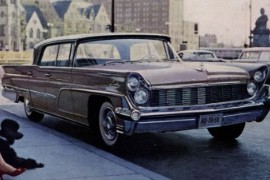