Lexus introduced the third generation of its mighty SUV RX in 2008 and improved it in 2012 with a well-deserved facelift, which enhanced it both on the inside and on the outside.

Toyota had enough turbo-diesel engines in its parts bin but didn't even consider installing one of those stinky powerplants under the RX's hood. It considered it a too mundane powerplant, fit for the hard-working HiLux pickup or for other econoboxes. But not for Lexus' SUV. Still, there was room for enhancement on this particular vehicle, which didn't get a chance to get the latest infotainment systems.

The exterior went through some changes, and the 2012 model featured the spindle grille that was later on found on other Lexus vehicles. The new, modern design language was underlined by a transverse slat on the bumper, visually connecting the two sides of the front fascia. Another significant change was for the headlights, which were available either as HID (High-Intensity Discharge) or LED, depending on the market. To complete this final change, Lexus also adopted the L-shaped LED daytime running lights. Also, the taillights were upgraded with clear lenses.

Another major improvement was on the interior, where Lexus finally got the second generation of the Remote Touch Interface for the infotainment unit. Also, there was a new steering wheel design and a binnacle layout for the instrument cluster. Between the front seats, Lexus installed a box in the center console, with the USB ports moved closer to the lid, so the driver didn't have to dig deep to charge their phones while driving. Apart from these technical enhancements, Lexus added new trims, including a matte silver one above the glove compartment. 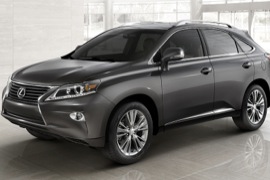 2 Toyota's 1UZ-FE V8 Once Humbled BMW, Mercedes, and Cadillac, They Could Do It Again