Lexus didn't have the charisma and the brand awareness as its main rivals, so it struggled to create a better car than its competitors.

The third generation of Lexus' flagship model debuted at the 2000 North American International Motor show, and, at first sight, it looked like its designers peaked at German premium carmakers. But when the vehicle was thoroughly studied, it revealed that it was a better-build machine.

Toyota put all the technology it had inside the LS. The Japanese automaker went on to create smaller gaps in the bodywork and studied every single piece of the panels to make them look perfect. The design team, on the other hand, lacked the imagination to create something unique. The car's big headlights resembled the shape of a Mercedes-Benz, and the grille was crossed by thin horizontal slats. The proportions were close to those of an S-Class, while the taillights looked very similar to those from an E-Class, spread between the rear quarter panels and the trunk lid.

Inside, the combination of wood and leather was a must for every flagship model created by a premium automaker, and so was the LS. The gate for the automatic transmission shifter was similar to the one from a Mercedes-Benz. But the fit and finish were just impeccable. Moreover, the carmaker insisted on technology and installed a black and green screen atop the center stack with buttons on its rim to show and control various functions of the vehicle, including the excellent HVAC. In addition, the long wheelbase led to ample legroom for the rear passengers.

Under the hood, Toyota installed only one engine paired as standard with a five-speed automatic transmission. While it couldn't offer the vast range of engines as its competitors, it created the best in its class powerplant in terms of efficiency, power, and low vibrations. 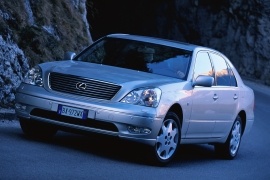