Porsche helped the Russian carmaker Avtovaz create a new product, which was different from any other vehicle made by any of them.

It was a big step forward for the Avtovaz Russian carmaker. From the carbureted, 1.2-liter engine with rear-wheel-drive installed on a car designed in the '60s, it jumped to a 1.6-liter, fuel-injected engine with front-wheel-drive. The car was ready to go into production in 1990, but the economic crisis and the fall of the Soviet Union postponed the production start.

The design was new, with narrower, rectangular headlights. The grille was almost completely covered, with just a small cut on its lower side. An additional cooling area was installed on the lower side of the bumper. On the side, a sideline visually connected the headlights with the taillights. Avtovaz offered the vehicle in three shapes: sedan, hatchback, and station wagon. The sedan was supposed to be the main attraction.

Inside, the car featured a design that was closer to the '80s vehicles than to those from 1995. There was no airbag for the driver or power-windows for the standard trim level. The designers installed white lettering on black dials and red needles inside the instrument cluster. A large panel showed which door was open on the center console next to the ventilation controls. There were two seats at the front and a bench in the back wide enough to fit three people inside if they were very close friends.

Under the hood, Avtovaz installed a choice of four engines ranged between 70 hp and 94 hp. There was no automatic gearbox on the options list. 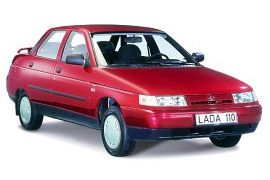