It was in 2008 when the bike manufacturer KTM decided to enter the sports car market with the X-Bow.

The new version was faster, featuring an upgraded Audi turbocharged TFSI engine that developed 296 hp and 296 lb.-ft of torque.

The exterior design was similar and the 2-seater sports car was quicker than most Ferraris.

The small sports car had no windshield, no radio, no windows and no doors. The seats were not designed to be comfortable, they were just a place where the driver and his passenger would be able to sit.
Another featured borrowed from Audi was the keyless ignition.

Practicality wise, … wait. There was no practicality. The 2-seater didn’t have a trunk. Moreover, getting into the car implied climbing the sills and removing the steering wheel. Visibility was not great either, the X-Bow being equipped with only two wing mirrors.

Of course, the above mentioned could be considered downsides. But on the other hand, just like an old saying says, you can’t judge a fish by its ability to climb a tree.

Even if street homologated, with X-Bow was designed for track. 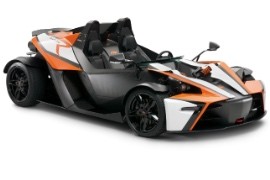