The second generation of the Sorento SUV was first previewed at the New York Auto Show in March 2009. This new generation uses a unistructure body and is Kia's first model built in the United States. Aerodynamics were improved from a not so great 0.43 Cx to a more acceptable 0.38 and the SUV safety development earned the car a 5 star rating from Euro NCAP. Visual-like the SUV looks more appealing than its previous cousin, displaying a bit of that American styling. Inside the car feels more uptown, with a newly designed center console and dashboard. The SUV can be ordered with panoramic glass roof, keyless entry and rearview camera. 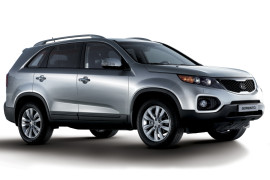