Kia stepped up its game and entered the mid-sized SUV market with the Sorento in 2002, a vehicle sold worldwide under the same nameplate.

The Korean carmaker was not new to the world of body-on-frame 4x4 vehicles. It already had the first generation of the Sportage. In its history, several other vehicles followed the same construction. However, after its marriage with Hyundai in 1997, the company was upgraded, and the results followed. The Sorento was one of the most important vehicles in the carmaker's lineup and showed the world that it could produce good quality, affordable SUVs.

Born in the middle of the new-edge design trend, the Sorento sported a front fascia dominated by curved lines and sharp angles, especially on the headlights. Moreover, to emphasize its off-road capability, the car featured a gray, unpainted lower bumper area, depending on the trim level. From its sides, the greenhouse offered a profile similar to a station wagon, just higher. In addition, the curved tailgate was extended all the way to the bumper to ease up the loading and unloading.

Inside, the high seating position was appropriate for an SUV. Even though the materials used were average, the layout was clean and logical. On the center stack, Kia installed the audio system on top, which was easy to reach by the driver. Moreover, there were controls on the steering wheel. At the back, there was room enough for three passengers.

Kia installed a front independent suspension on the Sorento that enhanced comfort, while the back was supported by a live axle. Power went to the rear or in all corners via a two-speed transfer case activated by a rotary knob on the dashboard. Depending on the market, the carmaker installed a 2.5-liter turbo-diesel engine or a choice of two gasoline-fed powerplants. 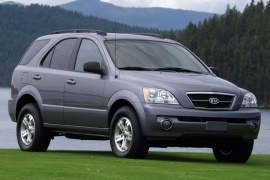