2 Dodge Charger Races Kia Stinger and Mercedes CLS, Someone Punches Above Their Weight

The fourth generation of the Kia Optima was launched in July 2015 for the Korean market and, later on, in other countries.

The Optima represented another design success signed by the former Audi designer Peter Schreyer. Its lines and features were another step toward a mass-market vehicle with premium touches, both inside and outside.

While the wheelbase of the 2015 Optima was increased by 10 mm (0.4") the overall length increased only with half than that. But a different interior layout made more room available for the rear passengers inside the medium-sized sedan. For the exterior look, the design team made a European approach, with a raked windshield and a sport-sedan look for the vehicle. On the front fascia, the swept headlights enhanced the sporty appearance of the vehicle.

Inside, the cabin was larger than on the former Optima. Besides the slightly longer wheelbase, the wider vehicle made more shoulder-room for the passengers. To improve comfort, more soft materials were used for the interior, with higher quality contact surfaces. New features were added, such as heated and ventilated front seats. The Nappa leather was offered as an option. For the infotainment system, an 8" touch-screen display was available and it included the Apple CarPlay and Android Auto connectivity. The sound system was created by Infinity and included a 14-speaker arrangement.

Under the hood, there were three engine choices: a 2.0-liter turbo, a 2.4-liter naturally aspirated, and a new 1.6-liter turbo. While the first two are mated to a standard 6-speed automatic, the latter sent its torque to the wheels via a 7-speed dual-clutch gearbox. 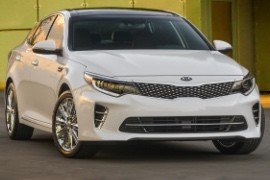