2 Jaguar Puts a Price Tag on 2024 I-Pace, Find Out Here How Much the EV Costs

The X-Type Estate was among the least desirable vehicles ever built by Jaguar, but it was needed on the market to compete against the German premium station wagons.

In 2004, Ford was still in charge at Jaguar and forced the British carmaker to produce a Mondeo-based Jaguar that could offer decent performances and the cat-brand's exclusive air. Worth mention that the X-Type was the best-selling Jaguar of its times during its production time, even though its sales were nowhere near its main competitors.

Unlike the sedan version, the station-wagon was designed by Ian Callum, the same mastermind that created vehicles such as Aston Martin Vanquish, Jaguar XK8, or Jaguar XF. He replaced everything behind the windscreen. The longer roof and redesigned side panels led to complete re-work for the doors, not to mention the trunk area.

Inside, only the dashboard and the front seats were carried over from the X-Type sedan, but with new door-cards and rear split-folding bench. Its trunk varied between 445 liters (15.7 cu-ft) and 1415 liters (50 cu-ft). For the base trim levels, Jaguar offered the X-Type Estate with velour upholstery. At the same time, the full-options version featured a leather-clad interior, wood-trims on the dash and door panels, and a navigation system.

By the time the station-wagon was ready, Jaguar already completed the engine range and introduced gasoline or turbo-diesel versions, with front- or all-wheel-drive systems. 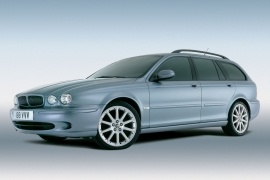