Hyundai introduced the Veloster as an alternative for the hot-hatch market in 2011 and built the vehicle on top of the same platform used for the Accent and the i20.

Carmakers are experimenting with new types of vehicles in their quest to find new market opportunities. Some of them are going hits, such as the SUV-coupe shapes, while some are going bust, such as the coupe-MPVs. Also, sometimes a vehicle's success depends on the timing when it comes to the market. For example, Hyundai looked like it marked a good moment in 2011 to show their Veloster, and it was a unique-looking hatchback.

While most hatchbacks featured three or five doors, including the tailgate, the Veloster offered four. It had two doors on the driver's side and one on the passenger's side. The vehicle's sporty look was amplified by the sloped roofline ending into a raked-forward rear windscreen. Since it had two doors on the curb's side, the rear occupants couldn't exit on the side of the car where the traffic was. That was a relief for parents who had their kids in the back.

Inside, the design team installed a dashboard resembling the i30 but with a V-shaped center stack. The letter came, obviously, from the Veloster. The bucket seats provided high bolstering, thus creating better side support for their occupants. In the back, the sloped roof provided minimal headroom for full-grown adults but was just fine for children. Also, it was better than in a regular coupe or in the Tiburon that the Veloster replaced.

Under the hood, the automaker squeezed a 1.6-liter, turbocharged engine. In addition, the powerplant proved to be very fuel efficient thanks to its direct fuel-injected system. 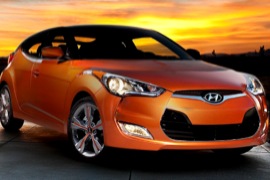