The electric revolution was on, and Hyundai caught a spot on the front row with the Kona Electric in 2018.

Just two years later, it decided to refresh the range.

Hyundai claimed that it sold over 120.000 units of the Kona in just two years. After most of its competitors, the small crossover was offered with gasoline, hybrid and electric versions and came late to the party. Maybe a refresh was unnecessary, but the Korean carmaker tried to stay ahead of its pack and introduced a few upgrades on the facelifted version. Thus, it tried to overtake the competition.

At the front, the 2020 Kona electric featured flush to the bumper daytime running lights. Unlike its predecessor, which featured regular round lamps, the new version introduced three curved LED-strips. Designers decided to bring more modifications to the bumper and enhanced it with side-scoops and a lower grille with two horizontal slats. In the middle, they placed the radar for automatic braking and adaptive cruise control. At the back, the taillights were changed with more striking LED lamps and a lower bumper design that mimicked the front one.

Inside, the instrument cluster featured a new 10.25 TFT display with two dials instead of one. To provide an easier reading, it featured white dials instead of black. On top of the center stack, the new infotainment unit with Android Auto and Apple CarPlay connectivity was enhanced and featured lower mounted buttons for easier access.

Hyundai kept the same powertrain options for the 2020 Kona Electric as the non-facelifted version. 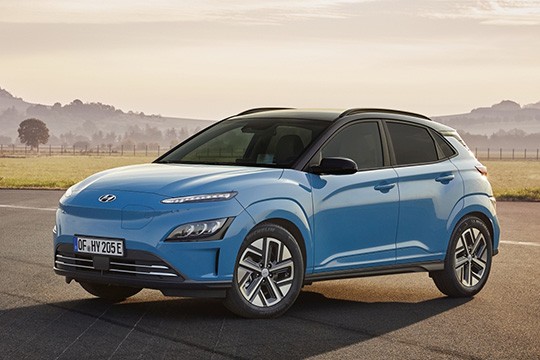