Hyundai made another step towards the electrification of its lineup when it introduced the Ioniq 6 in 2022, surprising the market with a streamlined vehicle.

By 2022, Hyundai was no longer a new contender in the EV car market. The Korean giant carmaker already had a few vehicles on sale. Still, it lacked a competitor in the sedan segment, which came with a four-door coupe styling flavor but shared its underpinnings with the already known KIA EV6 and the Hyundai Ioniq5.

At the front, the low nose and the sharp front fascia resembled the one featured on the Tesla Model 3, which was Ioniq 6's main competitor. The streamlined profile helped the car achieve an excellent 0.21 drag coefficient and showed a fluid line that ended on the sloped rear window. Unusually, the beltline followed a descending curve towards the car's end, resembling the shape of a Porsche 911 but with four doors. Even the back, with its ducktail and the additional spoiler placed at the bottom of the rear windscreen, resembled the same famous German sports car.

Inside, Hyundai said that the interior was centered around humans but focused more on individual places instead. At the front, the driver sat in a separate area, with a long dual-screen layout on its side and separated by the side passenger by the angular-shaped, tall center console. At the back, the sloped roofline forced the carmaker to install lower seats to offer enough headroom for adult passengers. 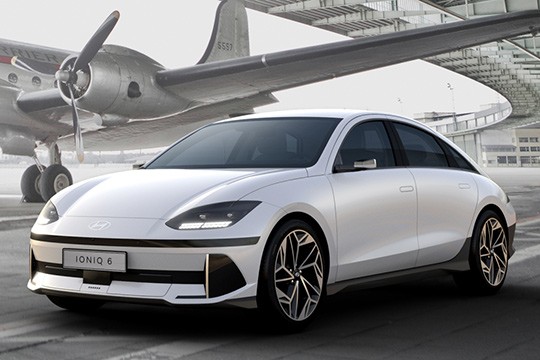 4 Carmaker Defies the Chip Shortage, Proves the End of the Nightmare Is Near