Hyundai Ioniq was launched in 2016 and it was the first car that was designed and engineered from the start to be a hybrid, plug-in hybrid and electric.

In 2019 it went through a mid-life cycle refresh, to boost its sales.

The eco-friendly car revolution didn't have to move everyone into the boring car territory. Hyundai understood that and it didn't rush to build their first ecological vehicle from the ground up. It created it with the ecology in mind so the same platform could have been used for more than just one solution, but all three of them.

The facelift for the Ioniq brought a new mesh-grille and an updated front bumper design with a silver-colored molding at the bottom. The LED DRLs, as well as the newly available, LED head- and taillights were completely redesigned to make the Ioniq looks better.

Inside the car, a new AVN 10.25” display to control the heating, and climate control. The electric version of the Ioniq has received a new, 7” LCD console display. The same display was also available for the hybrid and plug-in hybrid versions, on their higher trim levels. 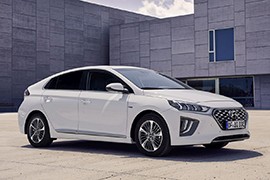 2 This Hyundai Santa Cruz Will Tackle the 2022 Rebelle Rally

5 Could This Be the Next Hyundai NEXO?