Hyundai won the 2019 World Rally Championship with the i20 WRC, and it wants to share its success with its customers by offering a special market version: the i20 N.

Hyundai returned to the WRC in 2014 and, in 2019, it won the Manufacturer's title with the i20 Coupe. But despite the glory, the customers were more interested in five-door versions rather than three-door ones. In 2020, Hyundai introduced the i20 N with five doors on the market.

While the regular i20 couldn't be considered a bold car, the N version was a different breed. The designers took the bodywork to a different level by adding a new aerodynamic kit. The front bumper was lowered, and a black and red front lip was installed at the bottom. On the sides, there were a pair of fake air-intakes which host the fog lights. The exclusive 18" light-alloy wheels were fitted as standard and unavailable for the rest of the i20 range. On top of the LED headlights, there was an interesting shaped daytime running light strip. In the back, a roof-spoiler made the car's look more aggressive, while at the bottom, there was a splitter under the bumper and a single, twin-pipe exhaust.

Inside, the front bucket seats featured integrated headrests. The instrument cluster featured a configurable TFT display, where the driver could choose which dial to be shown bigger. An additional screen placed on top of the center stack was used for the infotainment system and to record performance data as well.

Under the hood, the i20 N featured a 1.6-liter turbocharged gasoline engine that offered 204 hp. It was paired to a 6-speed manual gearbox. Power went to the front wheels via a limited-slip differential. The stiffer suspension made the car more planted to the road than its less-powered siblings. 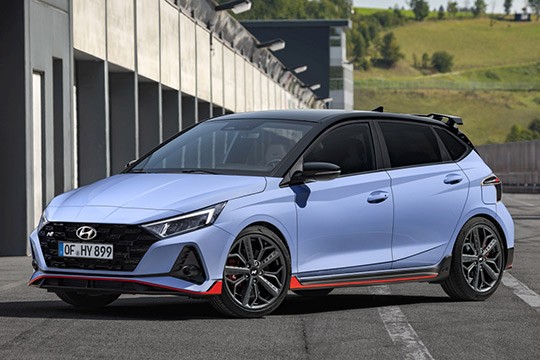