While the Bayon might ring a bell only to the European customers, it doesn't mean anything for the rest of the world.

Yet, Hyundai chose that nameplate for its 2021 crossover.

Bayonne is a resort in France, and its pronunciation sounds just like the Hyundai's crossover. Considering that, it might seem that the Bayon was a recreational vehicle, not a daily driver one. Yet it was, and even though it fought on the same segment as the Hyundai Kona, it tried to address different customers and lure them away from other brands.

The Bayon looked a lot bigger than the Kona, which didn't replace it, but it was similar-sized. Its front fascia sported the slim DRLs on the upper side of the bumper, well above headlights. A tall and wide trapezoidal grille covered most of the bumper, while a silver plastic trim mimicked a shield that protected the underbody. From its sides, it looked like a flame-surfacing concept, with various angles and panels sculptured to reflect light in all directions.

Inside, there was roomy enough for four adults, thanks to its compact-sized wheelbase. The Bayon featured a flat floor in the back, which was a good point if there were five people on-board. At the front, the driver enjoyed the multiple displays installed. Its instrument cluster featured a digital 10.25" display for all the information required for driving, while an 8" touch-screen found its place on top of the center stack for the infotainment system.

Under the hood, the Bayon featured a 1.0-liter turbocharged gasoline engine that provided up to 120 hp, combined with a mild-hybrid system. Hyundai offered the crossover with a five-speed manual, a six-speed manual, or a seven-speed automatic (dual-clutch) depending on the market and options. 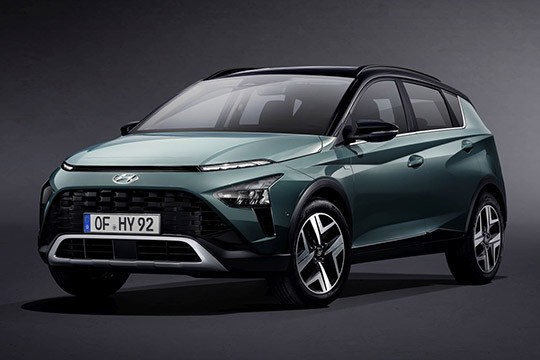