The fifth generation of the big MPV from Honda was introduced on the market in 2018 and, in 2020, it went through a mid-life cycle refresh.

The first generation of the Odyssey was introduced in 1995 and it was a great addition to a market hungry for innovative minivans. It was different in a good way and soon it became a desirable car for the North-American MPV market.

The 2020 facelift brought a new bumper design, with a slimmer lower grille. The headlights followed the same design style as the Honda Accord or the Civic. It was unusual to see an MPV with such an aggressive stance. On the sides, the sculptured door panels resembled those installed on the FCX Clarity hydrogen car. The D-pillars featured a black area that visually led to a floating-roof design.

Inside, the Odyssey was fitted with room for up to eight passengers. The middle row was sliding, tilting, or have the center seat removed, leading to a wider room for the occupants and creating a passage through to the rear seats. The car was fitted with a new option, named CabinWatch, which warned the driver if someone was still on the rear seats.

Under the hood, the Odyssey was fitted with the same 3.5-liter i-VTEC engine as before and it was mated to the new, 10-speed, automatic transmission available on the Honda Accord as well. Unlike the Accord, the Odyssey was not available with the new 2.0-liter turbocharged unit. 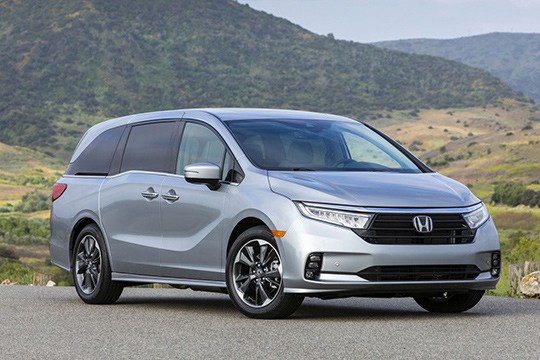