Honda introduced a facelifted version for the European Civic sedan in 2008, preparing it for the Euro 5 emission standards.

While the U.S. customers had to wait for a few more years to receive a new version of the sedan, the Europeans already had it refreshed. The Japanese carmaker already had its new factory in Turkey up and running and needed to fill it with orders.

The facelifted version featured similar headlights and grille but with a different bumper. Unlike its predecessor, which sported rectangular fog lights, the 2008 model received round ones. Its lower grille was trapezoidal. In the back, the carmaker installed new taillights with a turn signal on the lower-outer area.

Inside, the carmaker introduced new materials inside the cabin and a new infotainment unit. For the middle trim level, the cabin received sport-trimmed black cloth seats with suede bolsters. Honda installed a 60/40 split bench in the rear as standard, expanding the trunk size.

Under the hood, the carmaker offered the car with only one engine option for the European market: a 1.8-liter, single-camshaft i-VTEC unit carried over from its hatchback sibling. It paired it with a six-speed manual while a five-speed automatic was on the options list. The carmaker used the same 1.3-liter IMA (Integrated Motor Assist) unit paired to a CVT transmission as standard for the hybrid version. 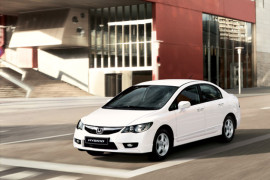