The smallest small SUV in the Holden line-up is called Trax.

It is the same vehicle, rebadged, as the Opel Mokka, Chevrolet Trax and Vauxhall Mokka. It is offered as an attractive alternative for the SUV market used mostly in urban environment.

The design has improved a lot since the first generation, which was launched in 2013, and now it features better headlights with LED technology and a sportier, more aggressive look.

The Trax is offered in three trim levels: LS, LT and LTZ with two engine choices. It is offered either with a 1.4-liter turbo or a 1.8 naturally aspirated one. Both are coupled with an automatic transmission sending their torque to the front wheels. Unlike its European siblings (Opel and Vauxhall) it is offered exclusively with front-wheel-drive.

Inside the cabin, the Trax welcomes its occupants with a 7” color touchscreen infotainment system, equipped with Apple CarPlay and Android Auto. The top trim, LTZ, offers a 3.5” TFT driver info display, used for the on-board computer and other vehicle functions.

The 2019 Trax has new features on the list: new 1.4 turbo engine, new interior trim, new sunroof and offers a push-button start along with a keyless entry system (called passive entry in Australia). 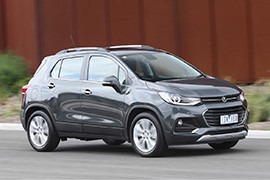