GM Australia introduced the Holden Malibu on its home market in 2013, based on the same platform as the British Vauxhall Insignia and the American Chevrolet Malibu.

While the Malibu name was well-known in the U.S., it wasn't that common on the streets of Adelaide or Sydney. It didn't have past history to compare, and that was, somehow, an advantage. Nobody cried because it was no longer rear-wheel-drive since it was just brand new for that market.

The 2013 model was built on top of the Epsilon II platform, but it was greatly improved when compared with other European or American siblings. Its design evolved into a much-rounded bodywork with a Holden-specific grille that sported a chromed slat on the upper side. Its swept-back headlights and sculptured side panels led to an image of a bigger car. The bumper featured a lower grille flanked by two clusters for the fog lights. In the rear, it featured Chevrolet Camaro-inspired LED dual-element taillamps.

The Malibu interior featured an all-new dual cockpit design that created an inviting, roomy and comfortable environment. The increased width of the vehicle led to a more spacious cabin. The Malibu featured metallic, chrome, or wood accents located around the shifter, surrounding the center stack, around the instrument cluster, and on doors and the steering wheel.

Under the hood, Holden installed a choice of two engines: 2.4-liter gasoline and a 2.0-liter turbo-diesel, the same used for Vauxhall/Opel Insignia, in Europe. 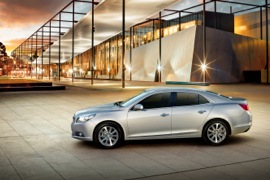