The Australian arm of the GM introduced the Jackaroo medium-size SUV on the market in 1998.

It was the result of cooperation between GM, Honda, and Isuzu.

Usually, when two big companies are joining forces to develop a vehicle, the result is very good. Still, the Jackaroo proved that it was possible to build an average vehicle even if three respectable carmakers were involved.

The body-on-frame Jackaroo was the Australian version of the Isuzu Trooper II and the Opel Monterey. A flat front area with a ready to be removed bumper for those who really needed a serious off-road monster made the car look somehow dull. The flat side areas were specially built to be protected by the wider tires if the car went through a narrow ravine.

Inside, the base model featured cloth upholstery while the upper trim level received leather. The instrument cluster featured the same layout as the Isuzu, with six gauges and the tachometer and speedometer larger than any other gauge, with the automatic transmission indicators.

Holden offered the Jackaroo with a wide choice of diesel and gasoline engines. The diesel versions received the Isuzu four-pot units, and the gasoline-powered versions took the engines from Honda and GM. Due to its transfer-box with a low-range gear, Jackaroo was a very good off-road vehicle. 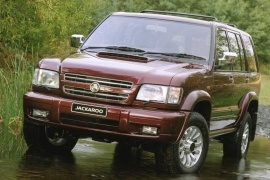