Holden introduced a final facelift for the Commodore Wagon in 2015, improving the car's look and adding some goodies to the interior.

By 2015, the Commodore nameplate was already 37 years old. When the facelifted version for the VFII, the customers were already aware that GM intended to shut down the Holden's factory from Elizabeth, where it made the car, but that didn't matter anymore. The car was already there and had some strong points for the Australian market. Its revenge was the last lineup that made more locals feel sorry for not buying them in larger numbers.

Depending on the version, the VFII Commodore sported a new front fascia. For the Redline level, the most powerful, a new aerodynamic kit allowed more cold air to get under the hood, while the side vents on the front apron diverted the airflow to the sides. On the hood, the carmaker installed actual ducts to release the hot air from the engine bay. At the back, the more extended roof covered the trunk area. Another improvement was for the taillights, which received an LED treatment.

Inside, the cabin remained the same, but there was a minor adjustment for the car's settings. The SS model received a bimodal system that allowed a louder, deeper sound for the exhaust. Due to it, the exhaust sent 10 more dB into the cabin. These louder pipes sounded even harder on the station wagon version since there wasn't a wall between the trunk and the passenger area.

The most significant modification was the introduction of the LS3 engine with a 6.2-liter displacement, which replaced the previous 6.0-liter V-8. 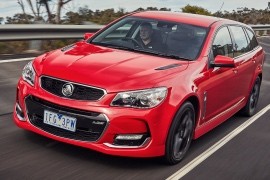