Holden introduced a new facelift for the Commodore's fourth generation, bringing several exterior changes, depending on the trim level and interior updates, while the engine lineup was revised.

The Commodore nameplate was already 37 years old in 2015 when the carmaker introduced the second facelift for the VF series. Even though GM already announced that it would shut down Holden's factory from Elizabeth, the carmaker didn't drop the mike and quit. Its revenge was the last lineup that made more locals feel sorry for not buying them in larger numbers.

Depending on the version, the VFII Commodore sported a new front fascia. For the Redline level, the most powerful, a new aerodynamic kit allowed more cold air to get under the hood, while the side vents on the front apron diverted the airflow to the sides. On the hood, the carmaker installed real vents to release the hot air from the engine bay. For the Callais version, Holden kept the same front fascia as on its predecessor, but changed the taillights with clear, LED ones.

Inside, the cabin remained the same, but there was a small adjustment for the car's settings. The SS model received a bimodal system that allowed a louder, deeper sound for the exhaust. Due to it, the exhaust sent 10 more dB into the cabin.

Under the hood, the most important modification was the introduction of the LS3, 6.2-liter engine that replaced the previously used 6.0-liter unit. The power went up from 367 hp to 413 hp and dropped the 0 to 100 kph (0-62 mph) time under five seconds for the manual version, while the automatic one got there in five seconds flat. 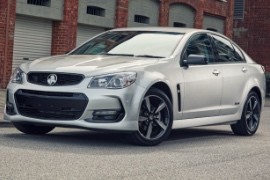