The Chinese carmaker Geely made a hatchback fit for specific markets based on the same platform as its sedan sibling.

There was something very familiar in the look of the MK2 hatchback; it resembled the Toyota Vios, and there was no surprise about that since the Chinese carmaker took its inspiration from the Japanese vehicle.

After the media started to criticize the brand for that resembling, the carmaker worked hard and redesigned the front end. It installed angular headlights that resembled the Opel/Vauxhall Astra H but with sharper lines at the top. In the rear, its taillights might have been mistaken for other cars as well, but overall the car looked familiar to many.

Inside, the carmaker installed the instrument cluster in the middle of the dashboard, like on the second-generation Toyota Vios, but with different styling for the center stack, which featured vertical vents instead of rectangular ones. Under the CD-stereo, the carmaker installed a small storage area with a lid for additional items. In the back, there was room for three adult-sized passengers if they were squeezed together.

Under the hood, Geely installed only one engine option paired to either a 5-speed manual or a 4-speed automatic. For selected markets, the Geely MK2 Hatch provided more engines of up to 1.8-liter displacement. 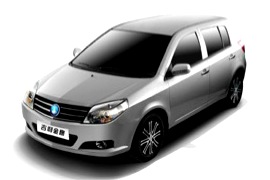 4 Lynk & Co Gets Its Own Version of the Polestar 5 – or Precept, If You Prefer