The Super Duty range was more of a truck than a pickup, but Ford still considered that it could fit it with car-like features and offered-it with a great comfort level for the upper trim levels.

While the F-150 took most credits for the best-selling nameplate in the world, its heavy-duty brothers were the silent heroes for hard jobs. Ford united the F-250, the F-350, and above into one family named Super Duty. These two were competing against the HD series from GM 2500/3500, the RAM 2500/3500, and Nissan's Titan.

From the exterior, the Super Duty showed a similar design to its well-known brother, the F-150, but taller. The Tremor F-250 featured simple wheels in the back, while its bigger brother F-350 was available with dual wheels in the back for heavier trailers. The C-shaped headlights flanked the broad and tall, body-colored grille with a black mesh design at the front. In the middle, it sported Ford's blue-oval badge.

Inside, in the Lariat trim level, it showed a luxurious cabin, with wide front seats and a bench wide enough to comfortably fit four adults. Its numerous storage compartments would make a child happy to hide its toys and find them years later. For the 2022 model-year, Ford improved the infotainment system and upgraded it to the SYNC 4 unit with a 12" touch-screen. 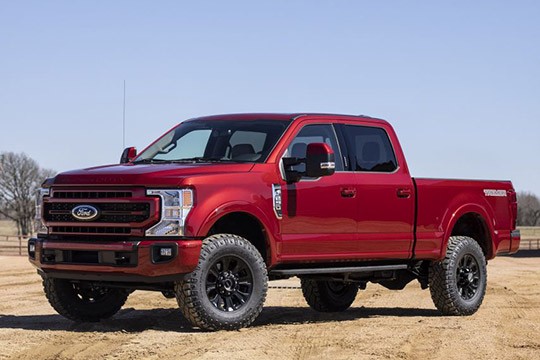