The original pony car was introduced in late 1964 and just a couple of years later went through some minor modifications.

Joe Oros, the lead designer of the Mustang team, stated once: "I wanted a car to appeal to women, but I want men to desire it, too." And that was the beginning of one of the most successful cars Ford ever made. The car was introduced in August 1964 with a small engine and a fast-looking image. Later on, the sports car received the engines it deserved.

In 1966, Ford planned the first slight adjustment to the vehicle, including the front end. The original model featured a black grille and, in the middle, the rectangular Mustang's badge with a running horse, supported by a cross-hair style four elements. In 1966, that detail was changed to a more conservative grille with horizontal slats and a center-mounted rectangular Mustang badge.

Inside, there were two bucket seats and a four-on-the-floor gear-stick. The instrument cluster resembled the front fascia, with two round dials on the outer sides and a linear speedometer between them, and three lamps at the bottom. The car featured another pair of seats in the back, with enough room for a pair of average-sized teenagers. An AM/FM radio was available on the options list.

For the 1966 model year, apart from other engine options, Ford introduced the 6.4-liter V8 unit paired to a 3-speed automatic gearbox. 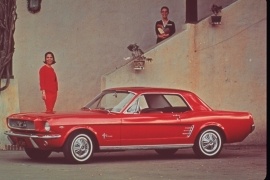