As expected, the Karma had a beautiful sporty, attractive design and it was built as a environmentally friend. Considered one of the weirdest luxury sedans, the starting price of the basic Karma was around $103,000 and went up to $120,000 for the top-of-the-range model.

Unfortunately, the Karma didn’t have a long life and went out of production in a little over one year. Why? Several customers reported battery supply issues, thus the sales dropped quickly.

The Karma was equipped with a 2.0-liter 4-cylinder turbocharged engine and two electric motors, together producing over 400 hp.

Inside the Karma were the most unexpected, distinctive features. The starting button had “EVer” written on it, and EVer was actually an acronym coming from “electric vehicle with extended range”, badge that could also be seen on the outside, on the side and the back.

The center console featured with window controls, as well as two cupholders.

The gear selector did not have a lever, there were actually buttons for selecting the gear, and all of them formed a diamond shape.

Whenever selecting a gear, a green light flashed under the glass panel located in the center console. The green light would flash differently depending on the gear selected, indicating the direction in which the driver was going to move.

The Karma did not have the traditional door handles, but rather electronic door poppers. A button was placed on the door panels and when actioned, the door would open electronically.

At a first glance, the distinctive steering wheel was equipped with paddle shifters. However, the paddles were actually used to change the driving mode. 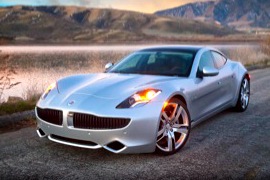 2 New Fisker PEAR Teaser Shows It Is Indeed an SUV

3 Fisker Reveals New PEAR Rendering, and It Has Little to Do With Previous Ones

Notice
The Fisker patented EVer™ technology uses an electric generator and battery pack to power the dual electric motors to drive the wheels, giving the Karma a range of up to 50 miles of electric driving. After 50 miles, the internal combustion gasoline engine engages to support the electric motors for an additional range of 250 miles. (Note: the plug-in hybrid is never run by the engine. The engine provides the energy to run the electric motors).


The Fisker Karma’s efficiency has been assessed by Technischer Üeberwachungs Verein (TÜV), Europe’s recognized automotive certification agency, with the vehicle achieving a combined cycle figure of 135 UK mpg (2l/100 km or 112 US mpg) and a CO2 emission figure of 51 grams per km.
The extended range electric vehicle has also had its all-electric range of 51.6 mils (83 km) validated. As for the Sport mode driving, this brings a combined fuel economy of 31 UK mpg (9.2 liters per 100 km or 25.8 US mpg).