It seems that when the sports car was track-homologated, the nameplate was changed on papers with GTO - “o” from “omologata” in Italian.

The first GT 250 was released in 1960 and the model did not stand out as the revised 250 GTO released in 1962. But why did Ferrari need to redesign everything after only 2 years from their first generation?

The new Formula One World Constructors' Championship requirements implied a GT - back in the days, the Gran Turismo meant “material differences in performance, speed, comfort, and amenities between elite automobiles and those of ordinary motorists.”

The major differences between the 250GT and the new model were the engine and the wheelbase. The 250 GTO got the Testarosa V12 engine developing 300 hp, while aerodynamics was improved with a longer wheelbase and other chassis changes.

While a pure rally car, once inside the 250 GTO things would get comfortable. The 250 GTO had one of the oddest gear shifting levers seen so far, a tall stick that was perfectly placed to ensure comfortable gear shifting.

The most famous and classic car of all times became iconic due to the several rally races won, as well as the limited number of vehicles produced, only 37. And it seems that all 37 models survived to our days. 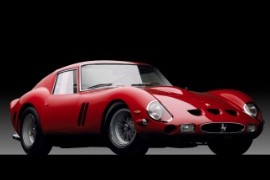