Dodge introduced the fourth generation of its monstrous supercar Viper in 2007 as a 2008 model year and showed a meaner, aggressive look.

With a design that left no room for errors, the Viper was already a feared competitor on the tracks, even by the best European supercars from that era. Moreover, the carmaker prepared a special version for the coupe-shaped model named ACR (American Club Racer), which was a hard-core track weapon.

In 2007, Dodge presented the fourth Viper generation in both shapes: coupe and roadster. The coupe sported the same two bumps on the roof to provide more headroom for its occupants, especially when they wore helmets. At the front, the new angular headlights and the six vents on the hood were an unmistakable feature for the 2007 model. One of the Viper's key features was the side-mounted exhausts, which made an impressive noise.

The Viper showed a minimalist interior with leather seats, an infotainment unit, and a cup holder. Its infotainment system was good only for its look since the speakers couldn't fight against the loud engine. Dodge considered installing just the minimum quantity of sound-deadening materials to pass the mandatory safety requirements.

Under the hood, the Viper featured an upgraded V-10 engine that punched out with 600 hp. As a concession, the carmaker installed ABS on the vehicle, but there was no stability control or traction control on it. Everything was on the driver. 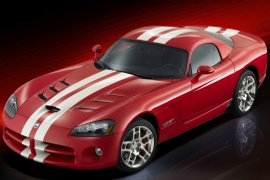