In 2004, Dodge introduced its version of a light pickup-truck developed together with Mitsubishi Motors named Dakota.

It was available in a few cab versions, including the Club Cab.

Chrysler and Mitsubishi were not at their first joint project. The Mitsubishi 3000/Dodge Stealth or the rebadged Mitsubishi Eclipse as an Eagle Talon were just a few examples. But while these two were successful, the Dodge Dakota/Mitsubishi Raider was not a very good deal for neither of them, especially since they competed in the declining compact pickup segment. The car was based on the same chassis as the Dodge Durango and was available in three cab version. The Club Cab was in the middle, between the two-seat and the four-door version.

Like the Durango, the Dakota featured a retro-design style with the fenders lower than the hood. The grille showed Dodge's chromed crosshair slats emphasized by another chromed rim, depending on the trim level. After the 2004 facelift, its headlights got bigger, with corner-mounted turn-signals. Unlike the single cab version, which was available with two doors and two seats, the Club Cab sported an additional set of rear-hinged rear doors for the rear passengers.

Inside, the base trim level featured cranked windows and a simple ventilation system as its only comfort feature. Dodge offered bucket seats, automatic climate control, and a CD-stereo on the upper trim level. The designers squeezed a pair of jump-seats for two passengers in the back, not old enough to buy a six-pack.

But, like the Mitsubishi Raider, Dakota's sales were not as high as expected. After Mitsubishi asked Chrysler to stop producing the Raider in 2009, it became even more difficult to sustain the compact pickup. Eventually, in 2011, Dodge stopped the Dakota production. 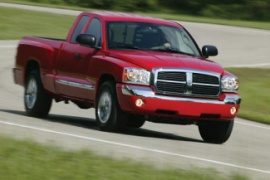