This was one of the oldest licenses for the old Renault 12 Estate in the world.

It was still under production with various updates over time, since 1979: the Dacia 1310 Break. It was produced in Eastern Europe, in Romania. Its look was barely updated. In 1999, it received a new pair of headlights and a new grille. The edgy design was sweetened here and there with some round corners or minor details.

The car featured manually activated windows and no central locking was available on the standard model. The power-steering was in the hands of the driver. It featured front disc brakes and rear drums. The suspension was an outdated independent system upfront and a semi-rigid axle in the rear. No sound system was offered by the factory, but it was an option for the dealers' equipment. It didn't have light-alloy wheels.

It was available in two engine versions: a 1.4-liter and a 1.6-liter engine, which offered 60 hp and 71 hp, respectively. The biggest improvement over the previous model was the fuel injection system. Before that, the engine had a carburetor. Another improvement was on the wheels, which received wider tires: 175/70 R13, compared with the previous 165/70 R13. No factory alloy-wheel was offered, but only steel. The five-speed gearbox was fitted as standard and no other option was available.

The instrument panel had a lot of information for the driver, but everything in the analog-system. Apart from the tachometer and speedometer, it had fuel level, water temperature, oil pressure, and battery charging. 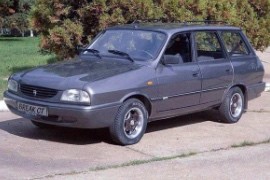 5 This Automaker Says It's Not Firing Anyone, but Employees Get Over $27,000 if They Leave