In just two years after the model introduction, Citroen managed to sell almost half of million, and then it introduced a facelifted version and kept the selling going.

Citroen introduced the Saxo in 1996 on the same platform as the AX, and it was a badge-engineered product as the Peugeot 106. With strong, over 100,000 units per year, the little Saxo in both three or five doors was a money-maker for the French carmaker. Its sales decreased only in 2003 when its successor, the C2, replaced it.

At the front, the 1998 model featured different headlights with curved lines instead of the angular ones from the 1996 model. The grille sported a wider opening, like a smiling face, with the "double-chevron" chromed badge enlarged in the middle. On its sides, the carmaker replaced the black rubber strips with body-colored ones but kept the trim level badges on the doors. To ensure a better airflow inside the cabin, the Saxo featured pop-out rear side windows. In the back, Citroen applied the same "round-it" theme design for the taillights.

Inside, the main difference was the new steering wheel with a three-spoke design and an airbag. The non-facelifted version sported a two-spoke design. Citroen didn't see any reason to change the rest of the dashboard design, which featured the same rounded lines and triangular-shaped vents.

Under the hood, the French carmaker removed the 1.6-liter gasoline engine from the lineup and left three gasoline and one diesel version on the offer. 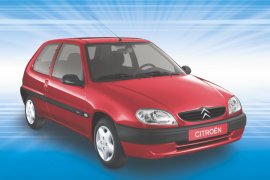