This was one of the vehicles that revived the French brand Citroen.

After years of weak presence in Europe on the small market, the Saxo came up and saved the day. Even though it was the same vehicle as its sibling brother, the Peugeot 106, the Saxo had better success. The different styling made it more appealing to the younger generation. The promotion program made by Citroen in the motorsport arena with the Saxo-Cup boosted sales across Europe.

Small, nimble and light, the Saxo had the advantage of a well-equipped vehicle right from the start. It was launched also in a time when Renault changed its best-selling model, the Renault 5, with the new Clio.

The interior had a wide range of options. For starters, it didn't even have central locking, but on the top models there were bucket seats, air conditioning, and nice stereo systems. Also, on the top versions such as the VTS or the VTR, the light-alloy-wheels were fitted as standard.

The engine range was big, starting with a frugal 50 hp 1-liter engine and going up to a sporty and nimble Saxo VTS, with a 1.6-liter and 120 hp unit. The VTS had a 0-60 mph (97 kph) sprint time in under 8 seconds, which was a very quick time for the era. In 2004, the Saxo ceased production, leading the way for the Citroen C2. 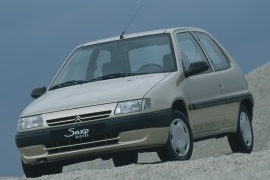