Citroen introduced the second generation of the C4 Picasso in 2013 along with its bigger brother, the C4 Grand Picasso.

While other carmakers were more concerned about SUVs, the French carmaker believed that the minivans didn't have their last saying. With respectable experience in building them, it used the same EMP2 platform to offer a true family carrier, with up to seven seats and big interior modularity.

The C4 Grand Picasso featured the same front fascia as the C4 Picasso. Citroen's designers made a gap between the hood and the front bumper where they installed two chromed slats and the “double-chevron” badge in the middle. On the outer sides, they squeezed the LED daytime running lights and the turn signals in the same strip. The bumper sported both the headlights at its upper side and the fog lights in the apron. From its sides, the C4 Grand Picasso had a long rear window between the rear doors and the tailgate. In the back, the up-mounted taillights flanked the tailgate.

Inside, the carmaker installed a digital instrument panel in the middle of the dashboard. On the front side of the dash panel, Citroen mounted the infotainment screen, between the front passengers. One of the greatest advantages of the C4 Grand Picasso was the seven-seat options in a 2-3-2 layout. In the middle row, the carmaker installed individual seats, which could slide, tilt and fold. They also sported Isofix child-seat anchor points. The last two seats in the trunk area were cramped.

Citroen offered the C4 Grand Picasso a choice of three gasoline and four turbo-diesel engines. They were paired to either a five-speed manual or a six-speed manual, with an option for an automated gearbox for selected engines. The carmaker was known for its comfortable vehicles and prepared an air suspension for the Grand Picasso's rear axle. 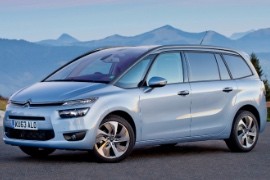