50 years after the release of the 60’s Mehari, Citroen revived the nameplate and attributed it to a convertible body with four seats and 100% electric operation.

One year before the E-Mehari was released, the Chevron presented a concept car - the Cactus M Concept, a cross between a C4 Cactus and the Mehari from the sixties. However, the new model had nothing to do with it.

In Paris, the Autolib public car-sharing service of electric cars offered the BlueCar vehicles, supplied by Vincent Bollore and designed by Pininfarina. Getting closer to the roots of the E-Mehari, the business man Vincent Bollore launched an electric beach vehicle based on his BlueCar, namely the Bluesummer.

An evolution of the Bollore BlueSummer, the E-Mehari was a good deal for both Citroen and Bollore, Citroen not needing to build the E-Mehari from scratch, taking only 8 months to design the convertible.

In 2018, the Citroen E-Mehari was updated and got a new optional hardtop, new exterior paint colors, new interior materials and a redesigned dashboard.

Aesthetically, the E-Mehari was not very different from the BlueSummer. With the wheel arches underlined with raw plastics and the raised ground clearance, the 4-seater gave a rather “buggy” spirit.

Inside, the Hawaiian print inspired by the upholstery found in the BlueSummer was unusual, with the seats covered in Neoprene, the same material used for wetsuits. It was waterproof and was easy to wash even under running water as it dried quickly.

The mechanical base was the same as the BlueSummer’s, with an electric motor mated with an automatic gearbox and a battery pack located under the floor.

Despite having limited power up to 68 hp and a body weight of 1,405 kg, the E-Mehari had a strong acceleration thanks to the immediately available maximum torque. 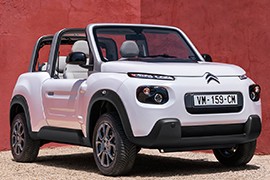