The second generation of the C5 came on the market at the beginning of 2008 and followed a new design trend than its predecessor.

When Citroen introduced the C5, the management of the French carmaker already knew that there was a financial crisis coming. That was one of the reasons why they rushed the car into production while its predecessor was only six years old.

Citroen's management already knew that a world financial crisis was about to start. Maybe that's why it rushed the car into production, phasing out its predecessor, which survived only six years on the market. But the carmaker needed a new car to sell, and the mid-size segment appeared to be the best choice. Moreover, it tried to compete against the premium German rivals on the European market.

On the outside, the design team dropped the elliptic headlights and installed horizontal, angular-shaped headlamps instead. Their angular shapes formed a boomerang style, with the outer corners lifted and swept back. On the lower side of the wrapped-around bumper, the carmaker added a set of turn signals and fog lights. The C5 featured a long greenhouse with a sloped rear windscreen that mimicked a former hatchback profile. Unlike its predecessor, it was available only as a three-box sedan.

The cabin was roomy for five adults, with two bucket seats at the front and a split-folding rear bench. Its driver had a difficult time with the buttons spread on the center stack and the steering wheel. They were just too many. Its trunk offered 439 liters (15.5 cu-ft) of space, which was less than its main competitors had to offer.

Under the hood, the carmaker offered the C5 a wide engine choice, enhanced and enlarged later on for the 2011 and 2012 facelifts. 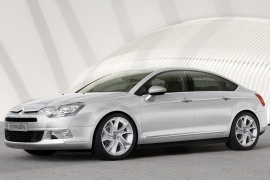