The European MPV market was not that big anymore by the late 2000s, but the French car-makers still had an advantage on the market due to their history in that segment.

Citroen insisted on offering spacious vehicles with a high level of on-board safety for its customers. The C4 Picasso was a good example of its egg-shaped form and sharp frontal area, typical for Citroen.

From the exterior, there were minor modifications to the car. At the front, a line of LEDs installed on top of the fog-lights formed the daytime running lights, which became mandatory. The front bumper was modified to support the new elements. The chromed lines that formed the brand's logo on the hood were thicker to enhance the car's image.

The interior was good for up to five adults on the regular size or up to seven for the Grand Picasso version (long-wheelbase). With its instrument cluster installed on top of the center stack, the driver could not hide the actual speed from other passengers. A small and thin lever was installed on the steering column's right side for the automated transmission versions. The manual version still hed the floor-mounted gearstick.

The European customers preferred diesel engines over gasoline ones on the MPV market. That's why the C4 Picasso was offered with just two gasoline versions and up to five diesel. A mild-hybrid was introduced and helped increase the in-city fuel-efficiency. 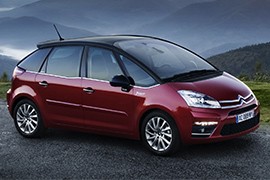