The third generation of the Citroen C3 was shown in June 2016. While it wasn't a class-leader for the small-size segment, it was stylish and had some tempting equipment.

The French brand had made a name of itself for building small cars in big numbers. The Citroen styling has been always different from the rest of the car industry. Sometimes it was ahead of its competitors and sometimes it lacked inspiration. For the 2016 C3 though, it featured some interesting ideas for a daily driver into a crowded city.

The front fascia was the most intriguing, with its "eyebrows" of LED, daytime running lights, over the headlights. The headlights were sculptured deep inside the front bumper to protect them for small bumps in the parking lot and the fog-lights had colored rims around. From the side, the black plastic, protections against shopping carts, and door scratches may have been looked odd, but they did their job. After all, it was cheaper to fix the plastic than to replace the door. The rear, highly mounted, taillights were LED and well protected against small accidents.

Inside, the C3 had an airy appearance, with a low and flat dashboard. The infotainment unit featured a 7" touch-screen display, compatible with Apple CarPlay and Android Auto. The car offered enough room for up to five passengers and a small trunk. While it won't' offer too much comfort for long journeys, it was enough for city trips. An interesting feature of the vehicle was a screen-mounted dashcam that could record the traffic ahead and share it on social media.

Under the hood, there were few engines and gearboxes available, including an automatic for selected engines. 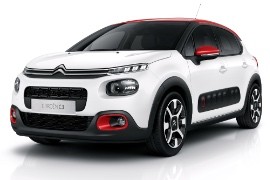