Citroen upgraded its C3 range for the 2005 year and brought new technologies for its five-door, small-segment contender.

Starting with 2005, all new cars sold within European Union had to comply with the Euro 4 norms and, since that was the most important market for the French carmaker, it had to adapt. But Citroen wasn't concerned only about the emissions; it took into consideration the design as well.

While the exterior was still trendy among its customers, Citroen considered adding a refresh for the front fascia. Its grille received a new design with narrower gaps between the slats, while the lower bumper lost its two horizontal bars and showed a bigger, trapezoidal-shaped air intake. In the back, the 2009 C3 received new taillights with clear-lenses over the reversing light's area. The small-segment vehicle featured black rubber strips over the bumpers and on the door panels depending on the trim level.

Citroen refreshed the car's interior and installed a new dashboard with a redesigned center stack. Its audio system was improved as well. The French carmaker upgraded the materials for specific trim levels.

Under the hood, Citroen upgraded all its engines to comply with the Euro 4 emission standards and included a new 1.6-liter turbo-diesel engine. For specific versions, the carmaker offered an option for four-speed automatic transmissions, while the five-speed manual was fitted as standard. 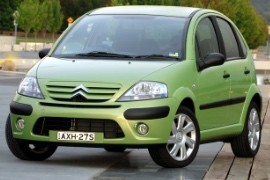 4 1970 Citroen DS Found in an Upstate New York Barn After 27 Years, All Original