Citroen introduced a station wagon for its BX range in 1985, and it made a difference on the market since it featured a unique suspension.

The French carmaker decided to replace the GS lineup in the '70s, but its bankruptcy prevented it from moving forward. After the marriage with Peugeot, it resumed its ideas, and its new owner helped it by giving it a new platform. Yet, some of Citroen's ideas were kept despite their higher production costs. The most important was the hydropneumatic self-leveling suspension, which proved to make a notable difference on the market, especially in the station wagon segment.

Launched on the market in 1985, the station wagon version of the BX, named Break, followed the same design ideas imagined by Marcello Gandini of Bertone. The long roof version kept even the same doors as its hatchback sibling. The most significant difference was that the roof was heightened and extended over the trunk area. At the same time, on the sides, there was a third row of rhomboidal windows between the C- and D-pillars. Moreover, the raked-forward tailgate kept the vehicle's dynamic look intact, despite being a family station wagon.

Inside, the carmaker used the same angular design language. Its squared-looking dashboard and the flat panels were cheaper to build and, in addition, followed Gandini's design concept. At the back, the folding seatback increased the trunk space from a decent 512 liters (18.1 cu-ft) to an outstanding 1,803 liters (63.7 cu-ft). Not bad at all for a 4.4-meter (14.4 ft) vehicle.

Under the hood, the carmaker decided to install only the higher-powered engines from the regular BX range. Thus, the base version came fitted with a 1.6-liter powerplant that provided 88 PS (87 hp), while the most potent version offered 105 PS (103 hp). 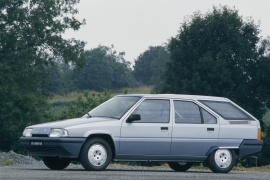