The Citroen BX was the car that saved the Citroen brand from collapse.

After the 1986 refresh, in 1989 there was a new range of engines installed in the car, to cope with the market requirements.

The Citroen BX was built to replace the aged GSA model. Its design was created by Marcello Gandini from Bertone Studios. It was the same designer that shaped the Lamborghini Countach. The initial design was offered in 1979 to Volvo as a concept car named Tundra, but the Sweedish company thought it was too much for that era. Citroen bought the project and asked Bertone to make it a 4-door hatchback. And the “origami-design” was approved and appreciated by the Peugeot-Citroen board.

In 1989 the BX received a new design for wheel-caps and door handles. It featured the same straight-lines design, with angular greenhouse and sharp front-end. The transverse-engine architecture allowed the engines to be mounted tilted rearward so it could have a narrow front end.

Inside, the instrument cluster was cluttered with more dials, especially for the top versions that featured an electronic fuel-injection system. But it was still easy to read. The side-satellites for the turn-signals were replaced with regular stalks. Even though the car was considered as a medium-sized vehicle, it was cramped even by 1982 standards when the car was shown. In 1989 it was even more difficult.

There were few new engines installed for the 1989 model, but the most important improvement was the introduction of the all-wheel-drive system with the 1.9-liter gasoline engine. 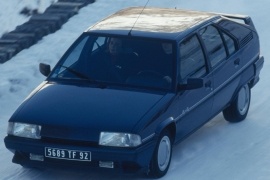