We first heard the name of Berlingo in 1996, with the launch of the Citroen’s first model.

24 year later, the Berlingo still satisfied the customer’s needs and Citroen came with a face-lifted version.

Launched at the 2015 Geneva Motor Show, the Berlingo offered the same versatility and practicality it’s used us with. The front was refreshed with a new bumper and redesigned headlights with LED, plus a new grille. Users were given two extra colors to choose from for the exterior paint: Acier Grey and Moka Brown.

The Berlingo was available in 2 different variants. The Multispace version designed for families and the LCV for cargo.

The first one mentioned was a great asset for bigger families and comfortable trips. Sliding doors were used to ease access, as well as a big tailgate that facilitated loading big luggages. Additionally, users could open only the glass part of the tailgate to pick small things from the trunk.

The interior offered no luxury and of course, it was not designed with this purpose. However, it was very roomy and practical. The base trim level offered electric windows, ABS and ESP.

The LCV version had a maximum payload of 896 kg.

No matter the variant, the Berlingo held the road well with its high center of gravity.

So if you’re looking for a family budget car or a simple and inexpensive utility van, the Berlingo should satisfy all needs. 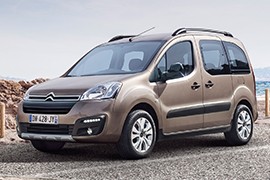