The Chevrolet SS, although a beautiful and powerful car, wasn't exactly a succes for Holden.

It was produced in Australia and imported to the US, a rather rare thing among other car companies. The SS was sold in Australia under the nameplate of Holden Commodore.

The SS's design was rather subtle, not necessarily indicating that it is a fast one. Surprisingly, the SS was equipped with a 6.2-liter V8 engine delivering no less than 415 hp. At first, it was only available with a 6-speed automatic tranmission and later offered with a 6-speed manual.

The vehicle could reach 100 kph in 4.7 seconds. If looked closer, it was easy to notice that the air vents present on the hood and fender were fake. In contrast with the car's simple design, a heads up for what was under the hood would be the huge 19-inch alloys and the brembo calipers.

The driving modes could be switched between the tour, sport and performance options by twsiting the dial. The steering and throttle sensitivity changed according to the selected mode. The suspension also changed, the SS being equipped with the best available from GM, the GM magnetic ride control suspension system. A rather "secret" mode could be activated if pressing the "traction control off" button twice, namely the Competitive mode - traction control and stability control deactivated.

Really interesting was that this Chevrolet had no SS signature on the engine cover. Most probably because Holden would've had to produce a new spare part with the logo, instead of keeping it simple. The SS signature was only visible on the passenger side, on the dashboard.

Although the car offered great features and perks, only 3000 were sold per year, during 4 years. Some say that it was way too expensive and offered too much for someone who looked to buy a fast car with less options, as no base option was ever offered. Others say that the name was way too common for Chevys, as they've used the "SS" for many of their models.

Sadly, The SS' production was canceled after 4 years only. 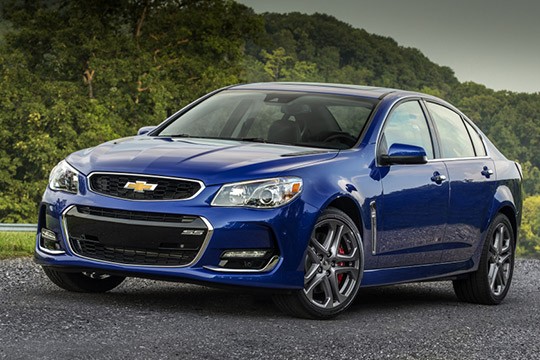 1 Chevy Corvette Z06 Drag Races Camaro ZL1, It's a 7-Second Run for One of Them

3 Not an Impala, Still Electrifying: 1964 Corvair Spent 40 Years Off the Road, Zero Rust

4 1961 Chevrolet Impala “Blue Beauty” Has It All, Complete, Runs and Drives

5 1956 Chevrolet 210 Spent Decades in a Barn, Hides Mysterious V8 Under the Hood