Chevrolet continued the Corvette saga with the introduction of the Z06 version for the C8.

Thus, when most carmakers were concerned about electrification, the American carmaker indulged itself with another extreme version of their supercar.

One of the most influential people in the Corvette evolution was Zora Arkus-Duntov. He created a particular version for the 1963 model with a fuel-injected V8 that offered 360 hp. It was a high value for those times. Fast forward to 2022, and the C8 generation came as the supercar envisioned by the brilliant engineer: a mid-mounted engine and a more powerful version: the 2022 Z06.

On the outside, the Z06 featured a wider stance by 3.6” (9.4 cm) than its Stingray sibling. At the front, a redesigned bumper sported a wider air-intake for enhanced cooling. From its sides, the 20” front and 21” light-alloy-wheels wore Michelin Cup 2 R ZP tires. At the same time, the carmaker placed an adjustable wing at the back for improved cornering speed and handling.

The interior featured a similar design with the rest of the stable, but GM added a carbon-fiber trim package. Thus, it completed the overall race-inspired experience for the two occupants of the cockpit.

Behind the cabin, GM installed a state-of-the-art naturally aspirated V8 engine. Named LT6, the 5.5-liter powerplant developed the highest power for any atmospheric V8s ever installed in a production vehicle to that date. The engine sent its 670 hp to the rear wheels via an eight-speed (dual-clutch) automatic gearbox. The final drive offered a 5.56 ratio, made for enhanced acceleration times. 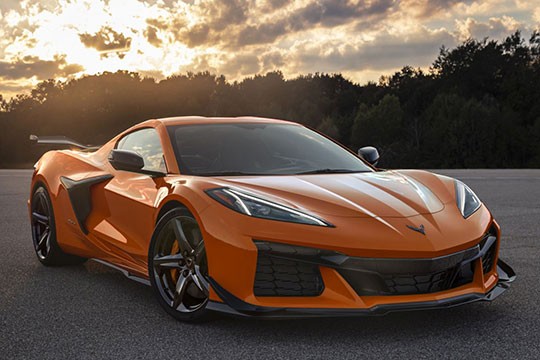